You are here: Home / News / Wrestling takes a hit with the Olympics (AUDIO)

Earlier this week, it was announced that the IOC would eliminate one of the Olympic’s original sports, wrestling. 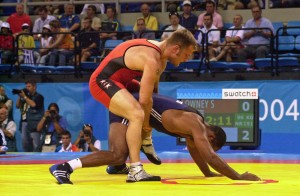 Regardless, the decision brought a sharp backlash from wrestling organizations around the world, including the United States.

The decision must still be ratified by the full International Olympic Committee (IOC) in September, giving wrestling some time to try to get that decision overturned.  Wrestling has been featured since the modern games started back in 1896.

The IOC has been encouraged by the way the International Wrestling Federation (FILA) has reacted to the disheartening news.  The vowed to make changes and to fight to be eventually included again in 2020.

The IOC executive board will meet in May to decide which sport or sports to propose for 2020 inclusion.  The final vote will be made at the IOC general assembly in September.

Justin Hull, from our Appleton affiliate WSCO Radio, talked with Garrett Lowney of Freedom for his reaction to the news.  Lowney has outstanding credentials to speak on the decision, winning Bronze on the 2000 Sydney Olympic games and participating in the 2004 Olympic Games as well.

Lowney was a 3-time High School State Champion in Wisconsin (Freedom-2 & Manawa-1).  Lowney is a Big Ten Champion (Minnesota) and a 2-time All-American.