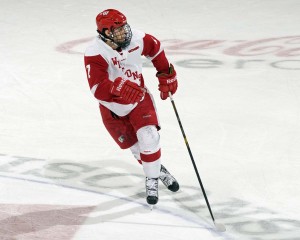 quarterfinals of the WCHA Final Five at the Xcel Energy Center on Thursday afternoon.  Eleven Badgers recorded points and Joel Rumpel tallied 38 saves as UW earned its 20th win of the season.

Tyler Barnes and Jefferson Dahl recorded two goals apiece with both of Dahl’s tallies coming while the Badgers were short-handed.  They helped the Badgers secure a spot in Friday’s WCHA Final Five semifinal against top seeded St. Cloud State (23-14-1).

The Badgers scored three goals in just over eight minutes and led 4-0 before the Mavericks even scored a goal.  The Badgers have now scored 29 goals over the last seven games and improved to 15-1-1 when scoring at least three goals in a game, including 13-straight wins.

Minnesota State tallied both of their goals while defenseman John Ramage was serving a 5-minute major penalty for charging.

Wisconsin continues its quest for the Broadmoor Trophy against St. Cloud State at 2pm CT on Friday.