You are here: Home / Badgers / Badgers look to slow down Ole Miss 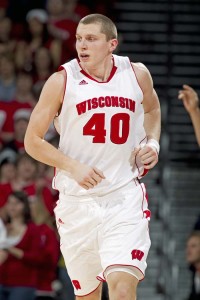 (11:40am CT) against the Rebels of Mississippi in Kansas City.

The Badgers will try to slow down a team that averages almost 80-points a game.  The key to the Rebels success is flamboyant guard Marshall Henderson who led the SEC in scoring at more than 20-points a game.  He’s also 3rd in the nation in three pointers made with 131.

Henderson has made 35.7% of his three-pointers and he likes to shoot them.  Of his 507 shots attempted, 367 of them have come from beyond the arc.  He’s also a weapon at the free throw line, shooting 88% from the stripe.

Henderson certainly is the centerpiece for the Rebels, both with his play and his antics.

The Badgers should be able to get the ball inside for some easy baskets.  If they do, there’s a good chance the Rebels may get into some foul trouble.

The Badgers arrived in Kansas City and immediately faced questions about their offensive style.

AUDIO: Jared Berggren said they don’t care what people think of their style :19

The Badgers held opponents to 39.4% shooting overall and 55.9 points a game this season.

Can the Badgers take Marshall Henderson out of his game, or will it be Henderson that frustrates the Badgers?  The answer to that question could be the determining factor in winning or losing for Wisconsin today.