You are here: Home / Brewers / Brewers agree with Kyle Lohse on a 3-year, $33-million deal

Free-agent pitcher Kyle Lohse has reached agreement on a three-year, $33 million deal with the Milwaukee Brewers with a potential for an 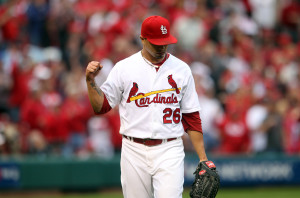 St. Louis Cardinals starting pitcher Kyle Lohse pumps his fist after getting out of the fourth inning against the San Francisco Giants at Busch Stadium in St. Louis during Game 3 of the National League Championship Series on October 16, 2012. UPI/Bill Greenblatt

Lohse declined a $13.3 million qualifying offer from St. Louis over the winter. The Brewers will give up the 17th pick in the upcoming June draft, along with the bonus money that Major League Baseball allots to that spot.  The Cardinals will receive an additional compensatory draft choice — the 28th overall pick.

Because his signing is so late is spring training, it is unclear when Lohse will be ready to make the starting rotation for Milwaukee.

It’s expected that Chris Narveson will have a spot in the starting rotation locked up, joining Yovani Gallardo, Lohse and Marco Estrada.  Either Wily Peralta or Mike Fiers will grab the 5th spot in the rotation with the other likely headed for the bullpen.

Thanks to Bill Pollock from Missouri Radio Network for this story contribution.