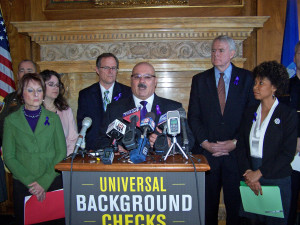 Democrats at the Capitol urge background checks for all gun buyers. Elvin Daniel – who said he’s an NRA member, sport shooter and hunter – stood with legislators and law enforcement, five months to the day after his sister Zina and two other women were gunned down at a Brookfield spa by Zina’s estranged husband Radcliffe Haughton. “I truly believe that had there been a universal background check back then, my sister Zena would still be with us,” he said.

The bill – to require criminal background checks conducted by licensed firearms dealers for all gun buys in the state – also drew support from Milwaukee police chief Ed Flynn, with a message to lawmakers. “Think about the victims. Identify with your constituents, all of whom could be the victim of firearms violence by somebody who’s procured a gun legally, with the intention of using it unlawfully,” said Flynn, who attended the press conference with Milwaukee Mayor Tom Barrett. Dane County Sheriff Dave Mahoney also spoke in favor of passing the bill. “If we can accomplish that we are going to decrease the number of firearms in the hands of criminals,” said Mahoney.

Democrats authoring the bill cite recent polling showing a majority of state residents support background checks as reason for GOP lawmakers to support the measure. “We’ve got the polling that shows that their constituents support this, so if they need that kind of comfort, we’ve got the numbers,” said Madison Representative Terese Berceau.