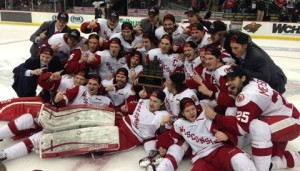 victory over Colorado College in the 2013 WCHA Final Five championship game at Xcel Energy Center.  The victory gave Wisconsin its 12th WCHA playoff title and its first since 1998.

The Badgers started 1-7-2 and at that time, playing in the NCAA tournament didn’t even seem remotely possible.  But Mike Eaves Badgers are living proof that sometimes, hard work and perseverance does pay off.

AUDIO: Mike Eaves on his team living to play another day :22