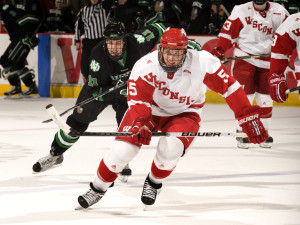 The Badgers, who swept Minnesota-Duluth in the opening round in Madison, enter the Final 5 in a five-way tie for 16th in the Pairwise rankings.  They can secure the league’s automatic berth in the 16-team NCAA field by winning the tournament.  But the Badgers could be in good position with the NCAA if they can reach the WCHA title game.

AUDIO: Mike Eaves says they’ll need to make a run to get into NCAA’s :20

UW split four games with Minnesota State this season, two home losses in November, coming during Wisconsin’s 1-7-2 start.  The Badgers won two overtime games at Minnesota State in January and is 18-5-5 in the last 28-games.

The Mavericks advanced to the final 5 by taking 2 of 3 games from Nebraska-Omaha in the first round.