The Marquette Golden Eagles were awarded a No. 3 seed for the second straight 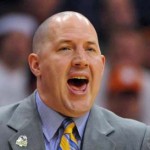 season.  They’ll take on Davidson in the first game on Thursday (2:10pm) in Lexington, Kentucky.

The 14th seeded Wildcats are the champions of the Southern Conference and have regular season wins over Virginia Commonwealth and West Virginia.

It was Davidson that knocked off Wisconsin and advanced to the Sweet 16 in 2008.  Stephen Curry scored 33 points against the Badgers in the upset win.

Marquette won’t have to worry about facing Curry or anyone else like him for that matter.

So who is Davidson?

AUDIO: Buzz Williams on who Davidson really is :22

Marquette is one of 8 Big East Schools in the tournament.  The Big East leads the way in that department.  The Big Ten is second with 7 teams in the field.