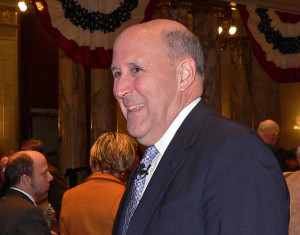 Governor Scott Walker plans to reject millions of dollars in federal funds for the expansion of Medicaid programs under the Affordable Care Act. Instead, Walker wants to tighten the eligibility requirements for programs like Badger-Care. That’s not sitting well with his predecessor, two-term Democratic Governor Jim Doyle (2003-2011). “During my time as governor I really worked hard at trying to figure out how to get people health insurance, not how to keep them from having health insurance.”

BadgerCare was created by former Republican Governor Tommy Thompson back in 1999 to help provide health-care coverage to low-income workers who weren’t covered by their employers, something Doyle supported. Under Walker’s budget proposal, people above the poverty line would be moved to private insurance. Doyle has remained quiet on the current governor’s policies, but when questioned, he couldn’t help but comment Walker’s Medicaid plan. “Well, as you can imagine, I just think it’s absolutely contrary to the direction Wisconsin’s gone since the mid-1990s … Governor Thompson and then the major expansion of BadgerCare when I was governor. I mean that’s the course that we’ve been on and this is obviously going in a very different direction.”

ObamaCare allows states to expand their tax-funded health programs for the poor and the elderly through at least 2020. But state Health Secretary Kitty Rhoades told the Joint Finance Committee last week that it’s not the state’s goal to have more people on government aid. Walker is concerned Wisconsin taxpayers would have to foot the bill if Washington did not live up to its obligation.

A new estimate shows larger employers would pay an extra $24 million to $36 million a year if their workers use health care exchanges to buy coverage.

Meanwhile, county leaders say if Walker is passing up the money, counties should have the option to use it.

Doyle responded to our questions after speaking to a group of young lawyers as part of the 4th Annual Young Lawyers Leadership Conference in Madison on Friday hosted by the State Bar of Wisconsin.

AUDIO: (29 mins) Hear the governor’s full keynote speech to the young lawyers. Doyle talks about a life in public service, lessons in humility, and having an open heart and mind while serving. Doyle was inspired by President Kennedy to join the Peace Corps. He spent two years teaching in Tunisia with his wife Jessica and later worked on the Navajo Indian Reservation.