You are here: Home / Business / Pocan reflects on first months on the Hill 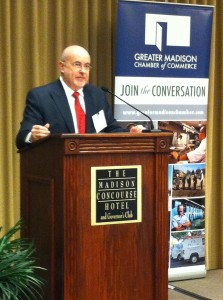 A freshman Congressman from Wisconsin reflects on his first few months in Washington. Prior to Mark Pocan being elected to Congress in November and his appointment to the House Budget committee, he served on the state Legislature’s budget panel including a stint as co-chairman.

Speaking to the Greater Madison Chamber of Commerce, he recalls his time in the Wisconsin Capitol: “We spent eight hours a day, three days a week for four months putting a budget together because every single line meant something; it’s a statement of your values. We just don’t do that in Washington.”

It’s been years since a budget proposal has cleared both houses of Congress, instead continuing resolutions are passed for previous budgets. Pocan cites partisanship as a reason for the gridlock. “The good news I can tell you is that our state delegation does work together,” adds the Madison Democrat.

Pocan emphasizes Wisconsin is well represented on the House Budget Committee with five of its 39 members, including Chairman Paul Ryan, hailing from the Badger State. California is the only other state on the panel with a greater representation in number.