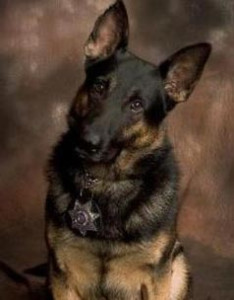 The search continues today for a missing K9 police dog. Lt. Shawn Becker from the Wood County Sheriff’s Department said Monday they had been at the scene west of Plover all day.

The Monday search focused on the area between Highway 54 and the Wisconsin River, a region that is mostly woods, fields, and cranberry bogs. There are some residences along the river, but few houses between there and the highway.

Becker said Toro went into the woods during an assist Sunday night at a Highway 54 traffic stop: “Deputy Joe Zurfluh was working at the time with his K9 unit Toro. Portage County didn’t have a K9 unit available, so we sent him over here. They were doing a search on the vehicle, probably for drugs, and during that search the dog did get away from Deputy Zurfluh.”

Becker is not sure what distracted the police dog, but did say it’s highly unusual. “He’s an animal, so it’s hard to say, but we’re going to guess it’s probably another animal that was in the area, got his attention, and he ran towards it.”Authorities say the dog is not dangerous unless he’s provoked.

Toro is not wearing anything but a collar with a three-foot black leash attached to it. Searchers suspect he may have the leash hung up on something in the woods.

Anyone with information about the dog should call the Wood County sheriffs department at 715 421-8702.