You are here: Home / Environment / Conservation / Snow not enough for drought 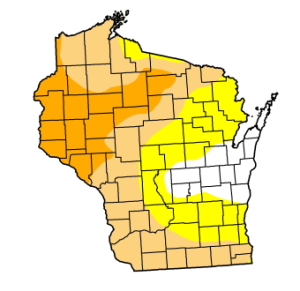 Despite lots of snow over the past few weeks, much of Wisconsin remains mostly dry.

Almost 89 percent of the land area in the Badger State is abnormally dry or worse, according to the latest report from the U.S. Drought Monitor.

Wisconsin Emergency Management’s Tod Pritchard says even heavy snow storms in recent weeks hasn’t changed much, although it did help. “As much as we hate the winter and we hate the snow storms that keep going through — well, you know, some folks do — these snow storms have really been a godsend for the farmers.”

The water table has been dry all winter.

The National Weather Service says the risk of spring flooding is about normal. The flooding is possible despite drought conditions in most of Wisconsin. Pritchard says conditions depend on how the spring plays out. “Even right now, even with the snowfall that we’ve had, we’re still in a drought condition … but it has improved and depending on how the spring plays out, if we get a nice gradual warmup, that could really make a big difference.”

The Weather Service says parts of west central Wisconsin could get flooding due to what’s called “concrete frost.” That happens when ice in the soil is not able to thaw, and then melted snow and spring rains quickly run off and cause high water.