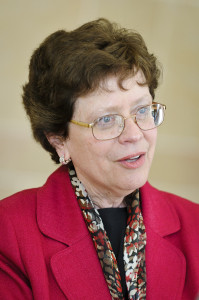 Dr. Rebecca M. Blank is recommended as the next chancellor of the University of Wisconsin-Madison (PHOTO: UW)

Dr. Rebecca M. Blank is recommended as the next chancellor of the University of Wisconsin-Madison. The recommendation comes from UW System President Kevin P. Reilly and a special committee of the  Board of Regents.

The Acting U.S. Secretary of Commerce has been with that department since 2009. Prior to joining Commerce, she served as a fellow at the Brookings Institution.

President Reilly said in a statement, “At a time when Governor Walker’s budget would reinvest in the UW System, putting our institutions in a position to step up in areas of workforce development and economic growth, Dr. Blank’s impressive skill set will be an invaluable addition to UW-Madison.”

Blank holds a Ph.D. in Economics from the Massachusetts Institute of Technology. She earned her undergraduate degree, also in Economics, from the University of Minnesota. “I am honored and delighted to be offered the job of Chancellor at UW-Madison. This is a world-class school, and I have been continually impressed by the caliber, dedication and enthusiasm of its students, faculty and staff.”

If confirmed by the full UW System Board of Regents on April 5, Blank would step into her new leadership role in July. She will succeed UW-Madison Interim Chancellor David Ward, who has served since July 2011. Ward was heading the campus temporarily after Biddy Martin left two years ago to become the president of Amherst College in Massachusetts.

In a statement Governor Scott Walker said, “Dr. Blank is a great pick for the University of Wisconsin-Madison. She has excellent academic credentials and strong leadership experience. Equally as important, she has a keen knowledge of economic issues that can help the UW promote great prosperity in the state.”

UW-Madison, the oldest and largest campus in the UW System, enrolls more than 42,000 students in 157 undergraduate majors, and conducts more than $1 billion worth of research annually.