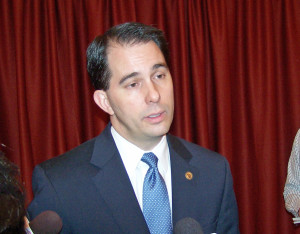 So, is Governor Scott Walker not running for President? At the Governor’s Conference on Tourism Monday in Madison, Walker was backing away from recent comments that made it sound as if he was at least considering the possibility of a presidential bid. “I’m not looking for any other job. I had to work extremely hard two times in the last two years to be governor. I love being governor . . . and as long as the people of Wisconsin want me to be governor, I’m going to continue to be governor,” said Walker.

Walker has talked a lot recently about how the Republican Party needs to present itself on the national stage, and he’s speaking to the Polk County Republicans in Iowa in May – scheduling that fueled speculation about a presidential bid, given Iowa’s prominence in the presidential process. “Copy editors writing headlines created different things than what I said,” the governor said at Monona Terrace on Monday. What I said is I love being governor. I’m not looking for any other job.”

Walker also attempted to clarify comments he made on Meet the Press on Sunday, regarding same sex unions. He pointed out that gay marriage remains illegal in Wisconsin. “It’s not just the law, it’s in the constitution, and I’m not proposing making any changes to that.”