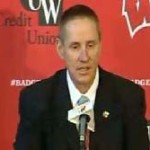 special teams and tight ends coach Jay Boulware, who bolted after just a couple of months to take a job with Oklahoma.

Anderson filled the recent vacancy by hiring Jeff Genyk, who joined Nevada’s coaching staff in January.  Genyk served as special teams coordinator and tight ends coach at California for the last three years.  He was the head coach at Eastern Michigan from 2003-’08 and coached special teams at Northwestern from 1996-2002.