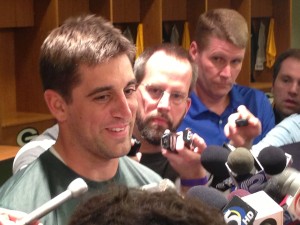 Aaron Rodgers is officially the highest paid player in the NFL.

The Packers and Rodgers agreed to a reported 5-year $110-million deal that will keep the MVP in Green Bay through the 2019 season.  Rodgers was very thankful for the honor when meeting with reporters this afternoon.

AUDIO: Rodgers is humbled by the deal :22

“Aaron is a true professional and a special player,” General Manager Ted Thompson said. “He works hard, is humble, and is focused on his actions, on and off the field. He is an excellent teammate and pushes himself and others to be the very best. We are happy to reach an agreement to extend his career with the Packers.”

“An exciting day for our football program,” Head Coach Mike McCarthy said. “Aaron is an excellent illustration of a Green Bay Packer. It is truly a blessing to witness his continued accomplishments, both on and off the field.”

Last week, the Packers gave LB Clay Matthews a 5-year extension worth roughly $65-million.  The two will make up roughly 30% of the teams cap space.