You are here: Home / Badgers / Alvarez gets another year in Madison 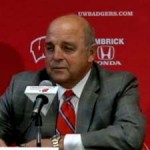 director at the school, which now takes him through the 2017-18 school year.

The 66-year-old Alvarez gets a $25,000 raise that puts his compensation package for this year at $1.05 million and keeps him among the highest-paid college athletic directors in the nation.