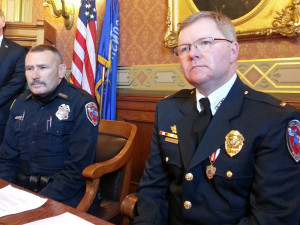 In a ceremony that was often punctuated by the recent bombing in Boston, the state Assembly on Tuesday honored two of the first officers on the scene at the Sikh Temple shooting in Oak Creek last year that left seven people dead, including the gunman.

Lt. Brian Murphy and Officer Sam Lenda were recognized as “Hometown Heroes” by the chamber, for their response to the mass shooting. Murphy was seriously wounded after he was shot multiple times by the gunman. Lenda is credited with firing a shot that took down 40-year-old Wade Michael Page, who then fatally shot himself.

Murphy, whose vocal cords were damaged after he was wounded, thanked lawmakers for recognizing their efforts. He said all they did was put themselves aside for “the greater good.”

Monday’s bombing in Boston weighed heavily on the ceremony. Murphy says those running to help those after the twin blast had no idea what they were running in to, but just did “what they were made to do.”

Lenda says those who ran towards danger, including both police and regular citizens, are cut from a special cloth and it stood as another example of how people respond to a crisis.

The Assembly on Tuesday also approved a resolution honoring the victims of the bombing in Boston, while Governor Walker ordered all flags on state buildings lowered to half-staff.