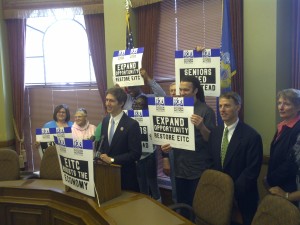 A “Tax Day” proposal to restore the state Earned Income Tax Credit. It’s from state Representative Daniel Riemer, a first-term Democrat from Milwaukee. “Families across Wisconsin will be better able to pay the rent or keep up on the mortgage, buy groceries and purchase other necessities,” said Riemer. “The EITC is not a handout. It rewards working individuals who find a job, stayed employed, take on extra hours, or find an extra job.”

Governor Scott Walker included the EITC reduction in his 2011 state budget. Riemer is also proposing to restore reductions to the popular Homestead Tax Credit, which were also part of the last state budget. He announced the bills during a Capitol press conference coordinated by Citizen Action of Wisconsin.

The EITC reduction “hits families with three or more children the hardest,” said Ken Taylor, Executive Director of the Wisconsin Council on Children and Families. “A single mom with three kids making minimum wage loses about $518. That’s 21 percent of her previous credit.” Lisa Subeck is a Madison Alder and executive director of the group United Wisconsin. “When we talk about the Earned Income Tax Credit, we are talking about putting real money back in real peoples’ pockets. Money that they can spend in this economy.”

Riemer said his proposed EITC legislation would carry a cost to the state of $54-million over the two-year budget cycle. With Republicans in control of the legislature, the bill has little prospect of receiving a public hearing.