You are here: Home / Sports / Bucks big man Larry Sanders is on the rise 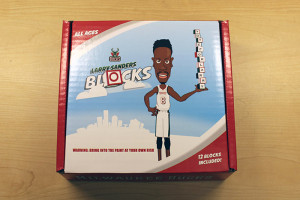 top defensive players in the NBA.

Sanders was a non-factor in his first two NBA seasons before turning things around this season.  He currently ranks 2nd in the NBA in blocked shots (2.9 per game).  He’s averaging 9.9 points and 9.6 rebounds a game.

Sanders is a strong candidate for the NBA’s most improved player award and the Bucks are trying to help by launching a new campaign promoting him for both the Most Improved and the Defensive Player of the Year Awards.

The campaign is basically just blocks.  You can see more at www.larryblocks.com including exclusive video of a 2-year-old Larry Sanders showcasing how his love-affair with blocks all began.

The Bucks are encouraging fans to get involved by tweeting their support for Larry using the #LarryBlocks hashtag.  Eight lucky supporters will be randomly selected to win an autographed box of #LarryBlocks.

The Bucks selected Sanders out of Virginia Commonwealth in the 2010 draft, with the 15th overall pick.

It’s the second straight year that the Bucks have had a player in contention for the Most Improved Player Award.  Ersan Ilyasova finished second to Orlando’s Ryan Anderson in 2011-12.