The Milwaukee Brewers opened the 2013 baseball season with a 5-4, 10-inning win over 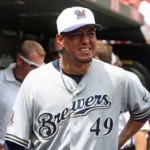 Gallardo struck out just three in five innings of work, allowing 10-hits and a pair of home runs.  Gallardo had gone 0-2 in his first three opening day starts with a 5.94 ERA.  That record will stay the same after the Brewers offense got him off the hook.

AUDIO: Yovani Gallardo says he’s glad to see the team get the win :12