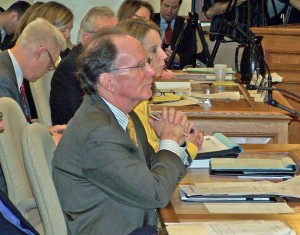 Tuesday’s hearing of the legislature’s Joint Committee on Employment relations was scheduled well ahead of the news late last week concerning the University of Wisconsin System’s $648 million budget surplus. The agenda was to include testimony from UW System President Kevin Reilly and UW Madison Chancellor David Ward, regarding a proposed personnel system. Given the furor surrounding the surplus though, that was clearly not going to happen.

Instead, Reilly found himself on the hot seat, as lawmakers grilled him on the surplus. Even the terms used to describe it pointed out the vast perceptual differences in the matter, with several Republican lawmakers referring to it as a “slush fund,” while Reilly spoke of a prudent surplus.

Senate President Mike Ellis was especially critical of the UW System Board of Regents. “They didn’t know about specifics,” said Ellis. “What did they know? Who’s running the university?”

“We do talk about the level of reserves with the Board of Regents at least annually, in a meeting of the Business, Finance and Audit Committee,” said Reilly.”But what we have not done in the past is drilled down below that level.” Reilly compared the UW System budget to a family budget, and said there are three basic categories of funds: restricted, committed and reserved.

Reilly said that in the future there will be greater scrutiny by, and accountability from, the Board of Regents. GOP lawmakers were skeptical. “This is a serious problem in terms of lake of accountability, lack of transparency, and lack of honesty, being straight up with the legislature and the taxpayers. I’m really concerned about that, and if you think if you’re going to be fooled today by this discussion, don’t count on it,” said state Senator Alberta Darling. “I hear your concern, and my intent is not to fool anybody Senator, and it never has been.”

After the hearing ended, Reilly spoke to reporters. “We need to come forward with a policy on what an appropriate reserve is,” he said. “That’s one of the basic questions. How much money should you have in these reserves and which reserves should you have it in. We’ll have a public discussion of that. We’ll also come up with what I think I heard we need, which is a more detailed financial reporting on an annual basis, on what those reserves are.”

“There’s a degree of arrogance here on the part of the university,” said Ellis. “They all think they’re PhDs, and we ought to be working at a Jiffy Lube. Well that’s not the way it works, the legislature is a heck of a lot smarter than they’re giving us credit for.”

Reilly last week pledged capping tuition hikes at two percent each of the next years, while the governor and some Republican lawmakers are calling for a tuition freeze. “The president failed to answer the question about the trust relationship, not only between the legislature, but between the parents and students,” said state Representative John Nygren. “Yeah, we’re talking about a two percent cap, but if we just simply shift it to fees in the future, I don’t think that’s something that parents and families can live with either.”