You are here: Home / Sports / Harris haunts his former team 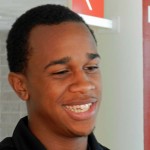 Former Bucks forward Tobias Harris, traded to Orlando earlier this season, scored 30 points and pulled down 19 rebounds in the win.  Harris tied the game with 1.9 seconds left by hitting a 3-pointer to force the overtime.

If it could go wrong in the final minute, it did for the Bucks.  They couldn’t get the ball inbounds and turned it over.  Jon Henson (17 pts. 25 rebs.) was called for goaltending and Monta Ellis (21 pts) missed a pair of free throws.

The Bucks have now dropped 14-straight games to the Magic in Orlando.

Milwaukee played the second half without injured starters Brandon Jennings and Larry Sanders.

The Bucks have four games left, starting with a trip to Atlanta to face the Hawks on Friday night.