You are here: Home / Sports / Henson leads Bucks to win in finale 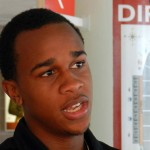 the Milwaukee Bucks to a 95-89 win in their regular season finale at Oklahoma City.

Oklahoma City held out starters Kevin Durant and Kendrick Perkins, along with some key reserves after having already clinched the #1 overall playoff seed in the Western Conference.  Durant conceded the regular season scoring title to New York’s Carmelo Anthony.  He would have needed to scored 70 points to pass Anthony.

Brandon Jennings added 17 points for the Bucks, who put an end to their 5-game losing streak.

The Bucks will open the Eastern Conference playoffs against the Miami Heat this weekend.  Game 1 of the best-of-seven series is Sunday night (6pm) in Miami.  Three of the first four games in the series will be broadcast nationally, including Sunday night’s game on TNT.