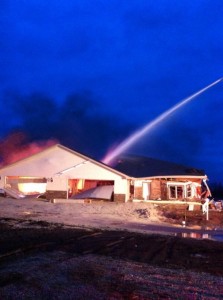 Division Chief of Fire Prevention Troy Haase says there was a lot of debris from the explosion in the area of Twilight Trails and Moonlight Lane. He says one half of the duplex is completely gone. The duplex was unoccupied and was under construction.

Haase says there was a small fire, but firefighters quickly put it out. The explosion occurred at 4:54 a.m. Alliant Energy crews were called to the scene to shut off power.