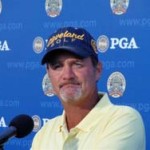 Simpson in a one-hold playoff.  McDowell began the day four strokes back before closing with a 3-under 69 for a 9-under total.

Wisconsin native Mark Wilson shot a 70, moving up into a tie for 9th place.  It follows a 3rd place finish at the Arnold Palmer Invitational in his last outing.