You are here: Home / Packers / Lions make first pick in the NFC North 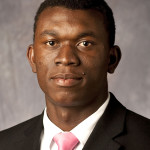 Ansah has drawn comparisons to New York Giants DE Justin Tuck.  Anash is a physical freak with his combination speed, size and athleticism.  His biggest weakness his fatigue, and that he admits.  He also considered very raw.

Ansah should help a Detroit defense that recorded just 34-sacks in 2012, that was towards the bottom at 20th in the league.