You are here: Home / News / Lobbying lawmakers for voting rights 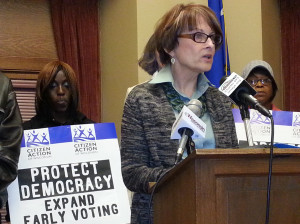 A coalition of about a dozen people convene in the state Capitol Wednesday to tout Wisconsin’s tradition of civic engagement as they push for more early voting locations in the state and advocate against what they call new voting obstacles being proposed in the state legislature. They’re referencing legislation by majority Republicans to eliminate same-day voter registration and to limit early in-person voting.

Anita Johnson is with Citizen Action of Wisconsin. “These initiatives are part of a broader effort to make it harder for people to exercise their right to vote.”

Representative Sandy Pasch (D-Shorewood) criticizes Republicans for remaining “dead set on disenfranchising voters,” saying their newest bill (AB-54) disregards local control and forces municipalities to adhere to strict early voting schedules. She is introducing legislation (AB-92) to give local governments more flexibility. “Assembly Bill 92 allows for multiple early voting locations to be open throughout a municipality in the weeks leading up to an election with whatever hours they choose to be open.”

Representative Terese Berceau (D-Madison) has two, what she calls, “common sense” bills, which are not yet drafted. One calls for “special registration deputies” on the county level to make things easier for municipal clerks. The other bill would allow potential voters to register online. “My bill permits a qualified elector who has a current and valid driver’s license or an identification card to register to vote via computer on a secure Internet site maintained by the Government Accountability Board.”

Berceau says registering to vote online would result in savings for municipalities due to efficiencies.

After a press conference on Wednesday, members of the so-called Protect Wisconsin Elections Coalition met with their legislators to advocate for the bills (AB-92 and SB-91) that would allow for multiple early voting locations in each municipality. The advocates also urged their legislators to oppose a bill (AB-54), that would limit the times for voting by absentee ballots in person.