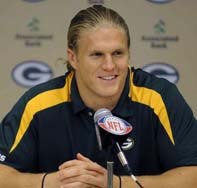 Packers through 2018.  The total package is worth nearly $69-million and includes a $20.5-million signing bonus.

Matthews becomes the highest paid linebacker in the NFL and the highest paid player on the Packers team.  Of course, the latter will only be the case until the Packers announce a new blockbuster deal with quarterback Aaron Rodgers, who will likely earn in the neighborhood of $25-million a season.

The Packers selected Matthews with their 2009 first round draft pick and has gone on to collect 42 1/2 sacks in his first four seasons.  Had he hit the market a year from now, he would have attracted even larger numbers.  But Matthews said he never considered going that route.

AUDIO: Matthews is glad to remain a Packer :22

AUDIO: Matthews asked if this deal sets him up to put his name among some of the best :20