You are here: Home / News / Melting snow does little to end drought 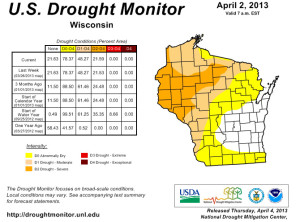 The snow cover continues to disappear across much of Wisconsin, but the spring melt has done little to help alleviate drought conditions. The U.S. Drought Monitor says about 78 percent of the state’s land area is still abnormally dry or worse, the same as a week ago.

Despite the persistent drought, progress has been made in the last month. The Drought Monitor says about 10 percent of the state became drought-free in March, including the Milwaukee and Madison areas. However, much of northwest Wisconsin is still in a severe drought, and parts of the west, north, and northwest are still in a moderate drought.

Most of the southeastern half of Wisconsin is either drought-free or abnormally dry, which is the lowest drought category.

It’s been a dry week in the Badger State for the most part. The National Weather Service says a series of low-pressure systems are due from Friday night into early next week. Parts of the north could get some snow accumulations, while rain is expected in the south. Above normal temperatures are possible during the weekend, but a slight cool off is predicted for the middle of next week.