You are here: Home / Badgers / Mersch returning to hockey Badgers for senior season 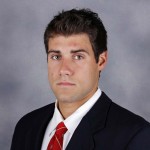 Madison, rather than turn pro.

Mersch was a fourth round NHL Draft pick by the Los Angeles Kings in 2011.

AUDIO: Mersch said it felt best to return to UW :13

Mersch scored 23 goals this season, fourth most in College Hockey.

AUDIO: Mersch says if they stay together, next season could be special :17

Besides Mersch, it’s likely that teammates Mark Zengerle, Tyler Barnes, Nic Kerdiles and Jake McCabe will return as well.  With that group, Wisconsin figures to be a serious contender to win the new Big Ten Hockey Conference and make a run at the National Championship next season.