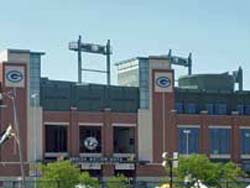 this evening by the NFL.

Green Bay’s schedule includes six games against 2012 playoff teams, with three of those contests (Atlanta, Minnesota, Washington) at Lambeau Field and three on the road (Cincinnati, Minnesota, San Francisco).  The Packers will travel to play both of the teams that played in Super bowl XLVII (Baltimore and San Francisco).

The Packers have two prime-time contests at home (vs. Chicago on Monday Night Football in week 9 and against Atlanta on Sunday night in Week 14) and two on the road (Sunday night contests at Minnesota in Week 8 and at the N.Y. Giants in Week 11).  Green Bay plays at Detroit on Thanksgiving for the fourth time in the past seven seasons.

Green Bay opens the regular season vs. the 49ers for the second straight year and at San Francisco for the first time in franchise history.

The Packers bye week arrives early this season, in Week 4.  It’s the earliest their open date has come on the schedule since they had a Week 4 bye in 1999.

For the first time since entering the NFL in 1921, Green Bay does not have back-to-back road games on its schedule.

The Packers will close the regular season on Sunday, December 29, at Chicago against the Bears.

The Packers also finalized the dates and times for their preseason schedule.  They’ll host Arizona on Friday, August 9th, then travel to St. Louis to face the Rams on Saturday, Aug. 17.  Next up comes Seattle at Lambeau Field on Friday, Aug. 23rd and the preseason finale is at Kansas City on Thursday, August 29th.

Here is the 2013 Packers Schedule, courtesy of Packers.com.