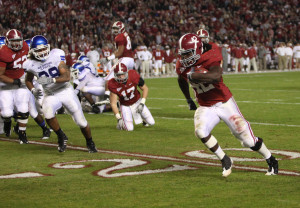 The Green Bay Packer fans may finally have the big name running back they have been waiting for.

With the 61st pick in the 2013 NFL Draft, the Green Bay Packers picked Alabama RB Eddie lacy.  At 231-pounds, the Packers beef up at a position they have had a revolving door at since Ahman Green.

In 2012, Lacy led the NCAA Football Subdivision in yards per/carry with 6.77 yards per game.  He also amounted 13-carries of 20-yards or more, scoring on four of those runs.

In his time at Alabama, Lacy played in 37-games making 14 starts, all in his final year with the school.  Lacy was stuck behind Mark Ingram and Trent Richardson in his first two seasons, both players were first round picks the last two seasons.

Lacy was thought to be the #1 running back by many experts, however, he was the fourth back taken; North Carolina’s Giovani Bernard, Michigan State’s Le’veon Bell, and Wisconsin’s Montee Ball.