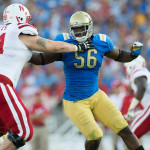 Jones senior season at UCLA was his best.  He racked up career bests in sacks (6.5) and tackles for loss (19).  His 62 tackles was also a career high.  He was a 5th-year senior.  The Packers were impressed with his versatility…

Green Bay has been searching for an impact defensive lineman since losing Cullen Jenkins in free agency after the 2011 season.  With B.J Raji, Ryan Pickett and C.J Wilson already in place as veterans and the picks of Jerel Worthy and Mike Daniels in 2012, Thompson is happy  with the group he has put together…

AUDIO: Ted Thompson on how the defensive line looks now :23

Jones was a History Major at UCLA and a member of the Honor roll in twice in his time at the School.