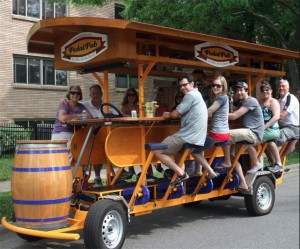 A Milwaukee area legislator wants to legalize the consumption of alcohol beverages on commercial quadricycles — entirely human-powered vehicles equipped with at least 12 seats in which a number of partiers pedal and drink as they travel from bar to bar.

The “pedal pubs” have been gaining popularity around the country. Milwaukee had one until a city committee pointed out that it was against state law to allow  open carry of alcoholic beverages in vehicles. Now, state Assembly Republican Jeff Stone of Greendale is proposing a bill to make an exemption for such vehicles in Wisconsin.

The legislation creates a penalty for drivers of the pedal pubs if they are under the influence of alcohol. Under the bill, navigators would have to limit their blood alcohol content to .02 percent or lower. Also, each local municipality can regulate operation of commercial quadricycles within municipal borders.

Other states, including Minnesota, Colorado and California currently allow the consumption of alcohol beverages on commercial quadricycles.

Representative Stone is currently seeking cosponsors to his legislation.