You are here: Home / News / State of the Tribes speech decries lack of communication 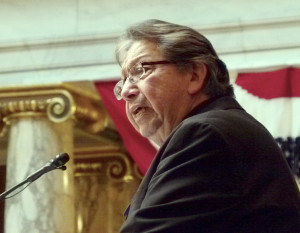 Lawmakers learn about the state of Wisconsin tribes on Tuesday, as one tribal leader denounces the new mining law.

Gordon Thayer, Chairman of Lac Courte Oreilles Band of Lake Superior Chippewa Indians of Wisconsin, delivered the State of the Tribes address to the full legislature for the annual event. Among the many criticisms, one contentious issue between the state and the tribes is mining. “Make no mistake, the 11 tribes of Wisconsin oppose the proposed mine and its permitting process.”

Other controversial issues include the hunting of wolves and spear fishing; Thayer accused the Department of Natural Resources of spreading inflammatory political propaganda. He told the crowd, “We cannot cash in our natural resources for corporate profit.”

Thayer said his message to lawmakers focuses on establishing “progressive collaboration” and more communication. “But we’re not your adversaries, we’re a part of this great state of Wisconsin.” It was a sentiment repeated throughout the hour-long speech. He said Indians can’t be dismissed as a subgroup of people in Wisconsin.

Assembly Speaker Robin Vos said in a statement after the speech that his party is working together with the tribes: “The State of the Tribes Address is a great opportunity to come together and learn more about the issues important to Wisconsin’s tribes. It’s essential that we maintain good government-to-government communications and find the areas of shared interests. While we may not agree on every issue, we can agree to listen to each other’s concerns and work together on the problems facing our state.”

Thayer acknowledged that tribes have “no shortage of challenges” before them on reservations, as well in the cities. “One of those issues is prescription drug abuse that’s rampant across the country.”

A state of emergency had been declared at Lac du Flambeau as a result of synthetic marijuana abuse killing their youths. Thayer said Illegal drug trafficking across the country is horrendous. On some reservations, he said, it is destroying whole families. “At LCO in the last year we had 10 people die of overdose.”

While Thayer criticized Governor Scott Walker for not mentioning them earlier this year in the State of the State address, he did commend the governor for meeting with the tribes several times, and scheduling even more meetings with tribal leaders.