You are here: Home / Packers / Wara works out for Packers 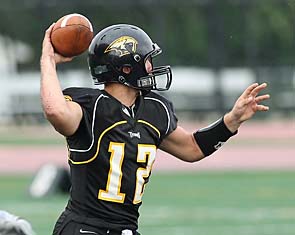 shot at making one of them.

The Green Bay Packers worked Wara out yesterday in Oshkosh.

Wara ran a triple-option spread offense at Oshkosh and led the Titans to their first WIAC title in 36 years.

Wara completed 65% of his passes for over 33-hundred yards and 30 touchdowns last season.

The only conference quarterback to ever get drafted into the NFL was Stevens Point signal caller Kirk Baumgartner, by the Green Bay Packers, in the 9th round of the 1990 NFL Draft.