You are here: Home / Packers / Who will be the Packers pick? (AUDIO) 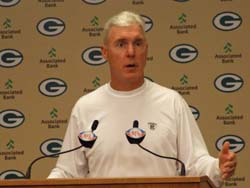 Tonight, the 2013 NFL draft takes center stage at Radio City Music Hall in New York.  The Green Bay Packers sit at the 26th spot which should put them on the clock sometime around 10:00 or 10:30 CST.

As to what the Packers could end up doing?  That question will probably be hard to answer with 25-selections before Green Bay combined with the ever difficult poker face of General Manager Ted Thompson.  Overall, the Packers have 8-picks, one in each round with an extra pick in the 5th round.  In an ideal world, Thompson would have more choices…

AUDIO: Ted Thompson on why more picks are better :13Looking at the “Mock Drafts” around the web, everyone seems to be taking a different stance on what the Packers will do:

The first round of the draft begins at 7:00 tonight.