You are here: Home / Packers / Al Harris retires as a Packer

Former cornerback Al Harris, who played seven seasons (2003-2009) in Green Bay, has informed the club of his decision to retire as a member of 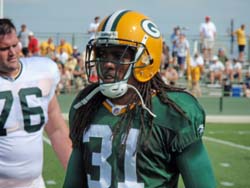 Harris was acquired by the Packers from Philadelphia in a March, 2003 trade.  He started all 102 games he played in for the Packers over seven seasons.  Harris was named to the Pro Bowl in 2007 and 2008, and earned second-team All-Pro honors from the Associated Press in 2007.