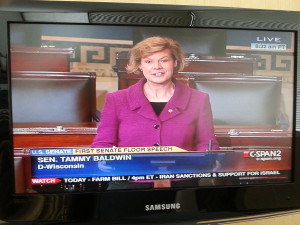 Baldwin’s first speech on the floor of the U.S. Senate

“Wisconsinites have told me that powerful and well-connected seem to still write their own rules, while the concerns and struggles of middle class families go unnoticed here in Washington. They feel like our economic system is tilted toward those at the top.”

The Democrat from Madison says many Wisconsinites tell her the political system protects the wealthy, rather than making sure everyone gets a “fair shot.” Baldwin says too many people are finding that even two jobs aren’t enough to make ends meet, and she says, “those jobs are hard to find and hard to keep.”

Baldwin is optimistic, though, saying she’s already had the pleasure of working with colleagues on both sides of the political aisle. “And I know that neither party has a monopoly on compassion or common sense. There’s nothing liberal or conservative about wanting to help our manufacturers compete and win on the world stage.”

Baldwin spent 14 years in the House of Representatives before winning a seat in the Senate last November. Baldwin opens her speech by pointing out that she occupies the office held for many years by Wisconsin’s “Fighting Bob La Follette,” a proponent of progressivism. (AUDIO: C-span)