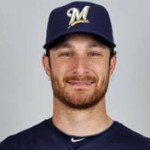 Pittsburgh Pirates 7-1 at PNC Park.   It’s the third straight loss to the Pirates after the Brewers won the series opener on Monday.

The Brewers continued their offensive struggles, especially in the clutch.  They’re 2 for 20 with runners in scoring position during the last 3-games.  Milwaukee has managed to score three runs in the last 23 innings.

The Brewers have dropped 12 of their last 14 games and their 16-23 record is the worst mark in the Central Division.

AUDIO: Ron Roenicke on his teams lack of offense :14

The Brewers only run came in the first inning.  Catcher Jonathan Lucroy singled home Jean Segura to put the Brewers on top 1-0.  That lead held until the 4th inning when the Pirates got a run scoring double from Clint Barmes to tie the game.

The Pirates went up 3-1 when Travis Snider crushed a 458 foot home run that settled in the Allegheny River.  The Pirates then blew the game open with 4 runs in the 6th inning.

The Brewers are now 1-6 on their road trip and it’s not over.  They have three games left, starting tonight in St. Louis against the Cardinals.

Rodriguez off to a good start

Reliever Francisco Rodriguez got off to a good start with the Brewers after being added to the roster this week.