You are here: Home / Education / Campus call to fix the debt (AUDIO) 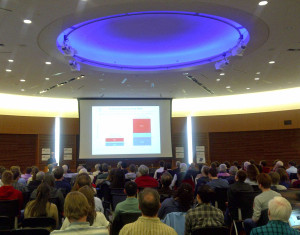 UW students and others hoping for a way forward on the nation’s debt crisis heard from D.C. politicians from both parties during a forum on the Madison campus Thursday night. They face record high student debt and uncertain job prospects, and they need to get organized. That was the message from David Walker, who served in three presidential administrations as Comptroller General of the U.S. Walker told students gathered at the Institutes for Discovery that social media only goes so far.

“My generation actually used to show up and march. Your generation needs to do that more,” Walker said. You have to be disproportionately engaged in order to make a difference, and I hope you do.”

Students also heard from Senator Ron Johnson and Representative Mark Pocan, a Republican and a Democrat who come to the debt debate from differing perspectives. Both agreed that revenues need to part of a solution, but differed on how to do that. Pocan said the tax code ought to be made more fair.

“In the Cayman Islands there is a five-story building that’s the home to 18,000 corporations – 18,000 P.O. boxes – just so they can avoid paying U.S. taxes. In south-central Wisconsin, almost every small business owner I know is paying their taxes, and paying what their fair share is,” said Pocan.

“If it were up to me, I’d scrap the entire thing, and I’d create a new one with two basic principles,” countered Johnson. “Raise the revenue you need . . . and do no economic harm. Stop trying to economically engineer, and stop trying to socially engineer with the tax code.”

Event organizer Alex Holland, a UW sophomore, hopes students will sign an on-line petition at thecankicksback.org. “We need a group that’s looking out for us, because right now, by they actions that our legislators are taking, they aren’t looking out for us,” Holland said. “We need to come together to solve these issues, because if we don’t, it’s going to be our future that is debt-burdened and jobless.”

The Concord Coalition and Fix the Debt-Wisconsin cosponsored the forum, along with the Bipartisan Issues Group founded by Holland and fellow UW student Tim Schlict.