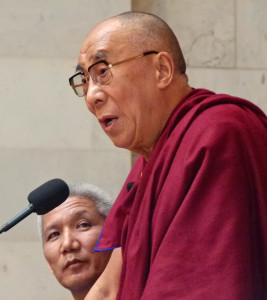 The Dalai Lama talks about compassion, democracy, true friendship, and inner strength during a stop in Madison.

Assembly Speaker Robin Vos gives His Holiness a warm welcome to the Assembly Chamber. “Here in this chamber every person in Wisconsin is represented. As you speak to us today, you are speaking to the entire state of Wisconsin.”

The 14th Dalai Lama talks about compassion and democracy. The Tibetan spiritual leader tells the crowd he’s honored to be speaking to a democratic nation, but he doesn’t like formalities where he has to “sit on a throne like a statue.”

The Nobel Peace Prize winner says everyone is the same, “Whether king or queen or High Lama or high fellow spiritual leader like Dalai Lama and a beggar, we are same. Same human being. My logic is, the way we’re born, the way we die — same.” He giggles and repeats, “Same.”

The Dalai Lama acknowledges that everyone wants a successful life, but he says it’s not about material riches; success is about inner value. “When we analyze the situation the ultimate resource of success for life is not money, not power, but here,” he point to his heart, “inner value.”

The 77-year-old leader tells the members of Wisconsin’s legislature, “Irrespective of believer or nonbeliever, rich or poor, educated or uneducated, everyone wants a happy life; everyone has the potential, which we learned from our mother.” The spiritual leader talks about genuine friendship, not friendship of money or power, but friendship of human beings.

Even politicians want success, he laughs, especially at the next election.

His Holiness also spoke at the Alliant Energy Center and had a private meeting with Governor Scott Walker. This is his 9th visit to Wisconsin since 1979. The last time he addressed the legislature was in 1998.

The Dalai Lama ends his 25-minute speech by saying, “So, that’s my report. Thank you.”