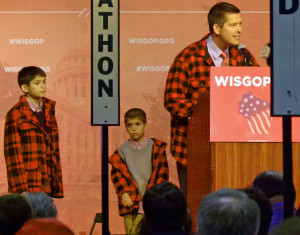 Wisconsin’s Seventh District Congressman, Sean Duffy, thinks his party has a communications problem. “There’s not a principle issue. I think there’s an issue of how we communicate,” Duffy said during the weekend’s state Republican Party convention in Wausau. “People have a perception of this party that’s wrong,” said Duffy. “It’s one of the most generous groups of people that we have out there.” He noted that those attending the convention raised 2,000 pounds of food to help local food shelves.

“I’m asking people to step forward and actually show everyone how much this party does care, and how the principles that we’re advocating for are principles that don’t hold people back, but actually allow them to advance,” said Duffy.

Duffy, a former Ashland County District Attorney who was elected to his second House term last November, said he believes immigration “is a roadblock to access a conversation with Hispanics.” But Duffy, who describes his six children as Hispanic and Spanish-speaking, said there are issues where the GOP can connect, particularly education.

Duffy said he’s willing to look at immigration reform, but has questions about the time lines. “That’s going to be the great debate that we have. We want to get people out of the shadows, but how do we get them on a path to citizenship, and when is that. I think that’s where you’re going to see disagreement, and a conversation.”