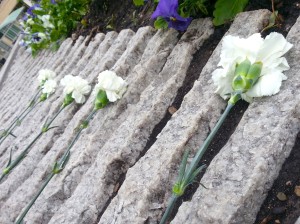 Five police officers killed in the line of duty are honored at the Wisconsin Law Enforcement Memorial Ceremony on the Capitol Square — four from the Milwaukee County Sheriff’s Office and one from the Wauwatosa Police Department.

Pastor Dean Collin presides over the service. “Grant by thy grace that no more names be added to these hallowed walls.”

Wauwatosa Police Officer Jennifer Sebena’s name was among those added to the memorial. Sebena’s husband is accused of shooting her to death while she was on patrol December 24th, 2012. Wauwatosa Police Chief Barry Weber says that Christmas Eve was a morning like none other he had experienced in his long career. “Jennifer Sebena had been killed while on duty in Wauwatosa. For what reason? I can’t answer that question. Jennifer was a young woman who wanted to be a police officer. She wanted to be a great police officer. I have never encountered anyone who has had anything negative to say about her. She had a bright future. Jen had a gentle nature and a pure heart.” 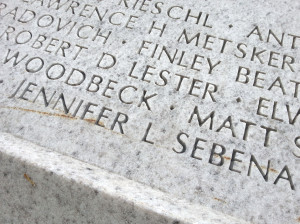 Sebena’s name was originally going to be excluded from the National Memorial because the board considered her death the result of a domestic incident and not in the line of duty.

Governor Scott Walker delivers remarks to those attending the outdoor service in 43 degree temperatures, including dozens of law enforcement officers and family members of those who gave the ultimate sacrifice for their service. “I want to thank all the men and women here today — in uniform, under cover, out of uniform, whether you wear blue or brown, tan, green, or gray, all of you every day put your lives on the line in so many ways that so many of us take for granted.” 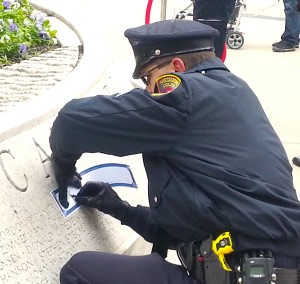 Officer uses pencil and paper to trace the name of a fallen soldier. (PHOTO: Jackie Johnson)

Attorney General J.B. Van Hollen also addressed the crowd. “Too many of us inappropriately think that you have to be gunned down by a mad man when you’re in hot pursuit to have given your life in the line of duty as a sworn law enforcement officer. Obviously that is a heroic death,” he says, but all those who have died and those who are still living and serving in law enforcement are to be respected for their service. The state’s top cop says the men and women who protect our communities have dedicated their lives “in an honorable way to an honorable profession,” he says, “Seldom with the reward they deserve for the great sacrifices they and their families make.”