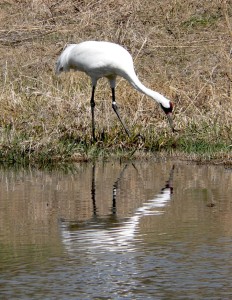 Black flies are believed to be responsible for many whooping cranes abandoning their nests in central Wisconsin in a core reintroduction area.

A wildlife biologist says 20 pairs of whooping crane nested this spring in Necedah, but 17 of them abandoned their nests earlier this month. Researchers recovered 19 eggs, several of which have been determined to be fertile. “All of those eggs have been taken down to the International Crane Foundation in Baraboo where they have been incubated and are awaiting shipment out to the Patuxent Wildlife Research Center in Maryland.”

Strobel says the whooping crane population cannot sustain itself if the adults continue to abandon their nests. But, he says, at some point the bird needs to weigh its options when considering the black fly infestation. “Is it better for me to take a risk and a cost to myself and invest it in my offspring or is it better for me to cut my losses and not take as much risk on myself.”

Researchers have been monitoring the black fly populations and their influence on nesting whooping cranes for the last several years. The Whooping Crane Eastern Partnership — the coalition of public and private groups that is reintroducing Whooping Cranes to eastern North America — has been conducting a multi-year study to examine the causes of nest abandonment. In spring 2011 and 2012, two nearby rivers were treated with a natural bacterium used as an alternative to chemical pesticides to control insects.

Overall, Strobel says, the population is doing quite well. Whooping cranes were on the verge of extinction in the 1940s. Today, there are about 600 birds in existence, approximately 445 of them in the wild.