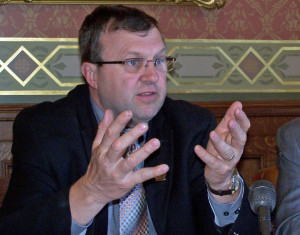 More fresh vegetables, fewer chips. That’s a requirement in a food stamps reform bill which passed the state Assembly Tuesday. The bill requires that two-thirds of items bought with ‘food stamps’ be from the WIC list – foods in the federal Woman, Infant and Children program. It’s from state Representative Dean Kaufert, a Neenah Republican.

“I readily admit that implementation could be a challenge,” said Kaufert. “But you know what? We are right around the corner (with) technology in these smart cards, and I think they’re going to be utilized in much different ways then they are now, so I don’t think it’s going to be much of a problem.”

“When we see so many people on the program now, almost 50 million Americans . . . I think it makes sense for taxpayer dollars to be spent in one-third in however they want to spend it, and two-thirds in a way that will hopefully benefit the entire family with nutritious food,” said Vos.

If passed and signed into law, the bill (AB 110) would also require a waiver from the U.S. Department of Agriculture, The Assembly passed the measure, 68 to 26, with some Democrats arguing many of the required foods are not readily available to many low-income households around the state.

Also Tuesday, the state Senate passed a bill creating state penalties for selling or trading food stamp benefits for anything of value.