You are here: Home / Sports / Investigator’s report on GB’s Wardle in the hand of the Chancellor 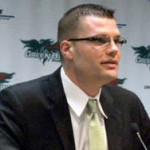 Green Bay players and staff members with regards to the allegations against the school’s men’s basketball coach Brian Wardle, has handed his findings over to University Chancellor Thomas Harden.

According to a statement released by the school, “Before the report and any decision are released to the public, chancellor Harden is planning to meet with coach Wardle.  The Chancellor said the University will have no further comment until the report is made public.”

The investigation centered around allegations of mistreatment by former player Ryan Bross.

Bross told the Green Bay Press Gazette that Wardle ridiculed him with vulgar language after he defecated in his shorts during a preseason training exercise, told him he would be a better player if he had sex with a girl he was interested in dating and refused to allow him to take classes for his major.

Chancellor Tom Harden said this morning that the University will publicly release the investigator’s report as soon as it is legally permissible to do so.