You are here: Home / Packers / Perry says he has something to prove

During his rookie season, Green Bay Packers linebacker Nick Perry couldn’t get over 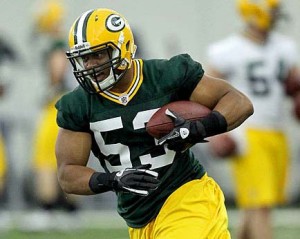 the injury bug.  Perry missed time with a knee injury but eventually had his season end early after a wrist injury that required season ending surgery.

Team doctors have cleared Perry already in April for all workout and football activities and he promises to be ready for the start of training camp.

Perry recorded 21 1/2 sacks in three seasons of college football at USC and he expects to have more chances to get to the quarterback in the Packers 3-4 defense.  Perry said he has something to prove.

AUDIO: LB Nick Perry said he has something to prove this year :16

Even though doctors cleared Perry, he was still sporting a cast on his left wrist during OTA’s this week.

AUDIO: Nick Perry on still wearing a cast on his left wrist :13

Dezman Moses and Erik Walden shared time in Perry’s absence last year.  While Moses will likely get some opportunities along with Perry this season, Walden is out of the picture after signing as a free agent with Indianapolis.