You are here: Home / Education / Petition pushes back on voucher expansion (AUDIO) 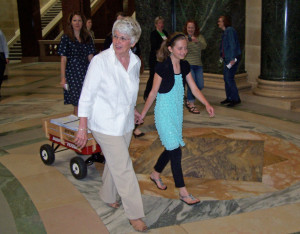 Expansion of the voucher school program continues to be the single most contentious issue within the state budget process, and Democrats in the legislature are continuing to push back on the proposal. On Wednesday opponents of the plan delivered more than 16,800 signatures, asking for removal of voucher school expansion from the state budget. Representative Sondy Pope and Lydia Oakleaf, a 7th grader at Madison’s Crestwood Elementary, pulled a red wagon laden with papers.

Governor Scott Walker wants to expand voucher schools beyond Milwaukee and Racine, to nine urban districts. At a press conference to announce the petition effort, Pope warned that he could end up getting far more. “As written, the budget language leaves open the possibility that with a few strokes of his veto pen, the governor could make statewide voucher expansion reality,” she said.

One of the target districts is Green Bay, where Denise Gaumer Hutchison is a parent. “I’m here to tell you today, schools in Green Bay are not failing,” she said. “It is inappropriate and is wrong to be saying that.” Beloit Schools Superintendent Steve McNeil was pushing back against inaccurate characterizations of his district. “Just recently we touted a graduation rate increase from one year of 86.9, to last year of 94 percent,” he said. “Unlike that number that was misrepresented by Alberta Darling on the Charlie Sykes show, saying Beloit had 40 percent graduation rate. We found it atrocious, and we fired back.”

Pope indicated that, even if schools were allowed to increase revenue limits, she wouldn’t budge on opposition to voucher expansion. “I’m not willing to cut that compromise,” she said. “The voucher expansion has got to stop, and it has to stop here.”

The petition signatures went to the offices of the governor, and Republican leaders on the legislature’s budget committee. As more signatures are gathered, they’ll be delivered electronically.